Millennials Love Mayonnaise (almost twice as much as their parents!) - The Association for Dressings & Sauces

Millennials Love Mayonnaise (almost twice as much as their parents!)

Millennials Love Mayonnaise (almost twice as much as their parents!)

May 19, 2015 (ATLANTA) — In a recent U.S. survey by the Association for Dressings and Sauces, Millennials or Generation Y (born between 1980 and 2000) came out on top as frequent purchasers of mayonnaise or whipped dressings in the past month. The survey, conducted among 866 consumers aged 18 to 65, revealed that 37 percent of those aged 25 to 34 (the older half of Millennials) purchased the product in the past month, nearly twice the next group of consumers — those aged 55 to 65 (typically the age of their parents) — at 21 percent purchasing.

The national online survey also asked about the most popular uses for mayonnaise or whipped dressing. The top vote getter — among all age groups — was sandwiches: 90 percent said they spread it on a sandwich, followed by 73 percent using mayonnaise as an ingredient in cold salads, 44 percent using in dips for vegetables, 25 percent on green salads and 25 percent as a baking ingredient.

When choosing a mayonnaise or whipped dressing, 40 percent of all respondents said their #1 factor was taste, followed by 19 percent claiming price, 18 percent noting brand, 12 percent naming nutrition and 11 percent saying variety was the key characteristic.

Taking a look around the U.S., all ages of respondents based in the South had a soft spot for mayonnaise or whipped dressing, where 30 percent were more frequent purchasers, having bought in the past month, compared with the Northeast and Midwest at 24 percent each, and the West at 23 percent.

“While we’ve known that the South tends to index a bit higher for their love of mayonnaise, what was surprising to us was the higher indexing of the older half of the Millennials,” said Jeannie Milewski, Executive Director of the Association for Dressings & Sauces.

Conducted in December 2014 by Turner Research Network, the survey polled adult consumers, aged 18 to 65, who identified themselves as the primary or shared grocery shoppers in the household and who purchased any type of spoonable dressing products from any retail outlet in the past 12 months. The sample for the survey was based on total U.S. households.

About the Association for Dressings & Sauces
For more information about ADS, visit http://www.dressings-sauces.org. 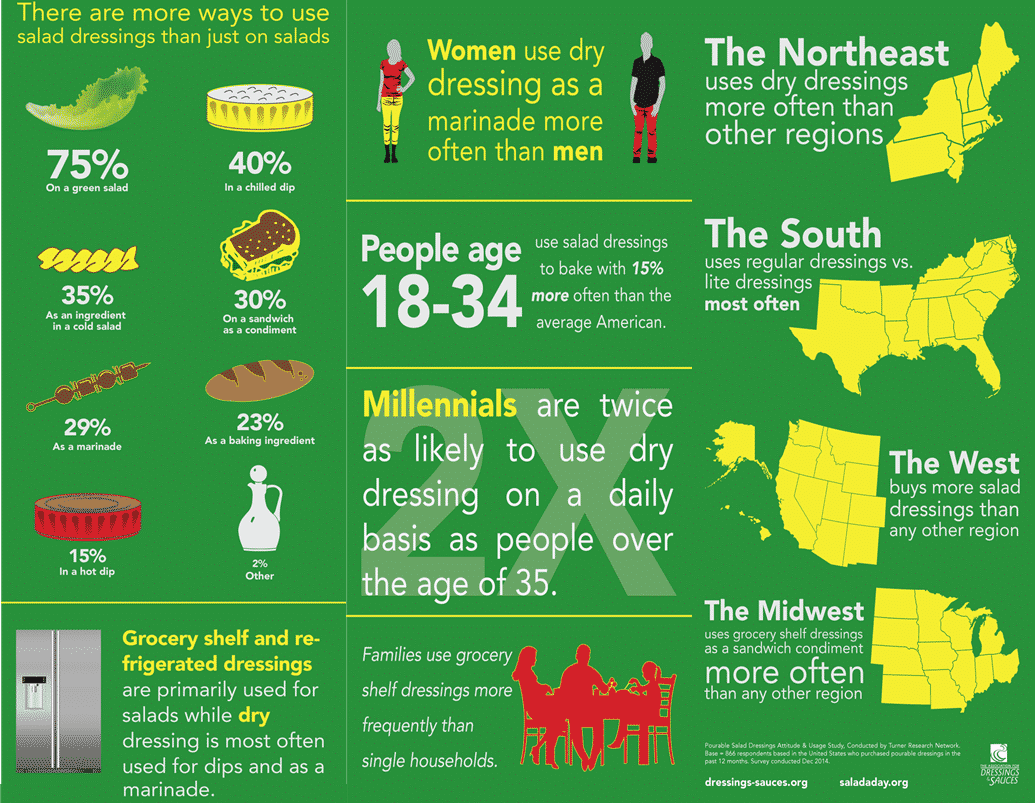 7 more ways to use salad dressings